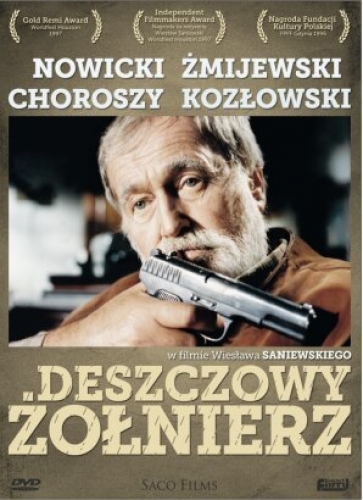 The Rain Soldier is a story that weaves together the lives of Anna, a 28 year-old prosecuter and her father, Captain Szymanski, a military lawyer. One evening, after a brutal episode, Anna leaves her lover, Jerzy. Desperately, she drives away in a strong rain. She nearly kills a young man, walking in the middle of the road. The man, frightened, doesn’t remember anything. In his pockets he has only a chestnut and a gun. Anna thinks he’s in danger and decides to hide him. She takes him to “The Russian Town”, a quarter surrounded by a wall, not long ago inhabited by the Soviet Army. Anna tries to discover the man’s secret and finds out that the gun he’s carrying belongs to her father.
Polish
director Wieslaw Saniewski received an ovation from the audience at the premiere of his latest film The Rain Soldier. The members of the jury of the 30th Houston International Film Festival 1997 agreed with the Polish audience and critics and awarded him with the Gold Award. The Rain Soldier is a film about exploring mystery and looking for the truth. But first of all it is a story of unusual love. It’s an example of an unconventional treatment of “Polish reality” and it’s considered as the best Polish film in years.