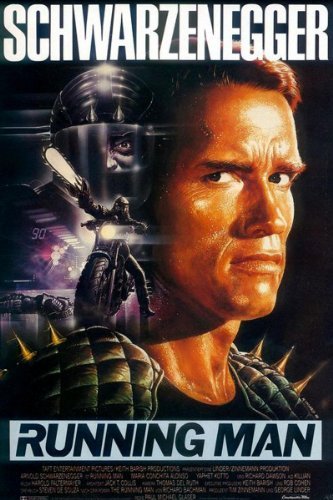 The Future: where megalopolises and media rule; a swarming humanity is moving in a concrete universe with disproportionate buildings: the darkest poverty stands alongside the dirtiest richness. Only one passion brings all those men together (?) for a few hours par week: The Running Man, a broadcast game show. There are giant screens in every street and the crowd agglutinates in front of them every week. In this game, some ex-convicts fight against each other to death: some idolised champions, more dangerous (with fire), more savage (with a chainsaw) and wilder (with electricity) than one another. The criminals barely have a chance to survive, but did these asocial people, these horrible criminals only deserve to die? And it seems worthwhile: if they win, their heavy slate is erased and they will live happily on an idyllic island…
“Stephen KING is once again put in the spotlight with the adaptation of his work (signed by the pen name “Richard BACHMAN”), directed by Paul-Michael GLASER, who demonstrates the vast and brilliant extents that the school of television can offer. With his impressive biceps and a big cigar between his lips (cf. Raw Deal), rigid – if we exclude some touch of humour in his eyes – SCHWARZENEGGER carries on the image he has already shown in Commando and Predator, of which he keeps the same and successful profile for the role of a futuristic police officer, victim of a chain of events which will force him to take part in The Running Man show.
Very accomplished technically speaking, with excellent special effects and a successful directing, The Running Man reaches its ambitions and offers a very visual and perfect show of lively action to the audience.” – Cathy CARANI and Alain SCHLOCKOFF.