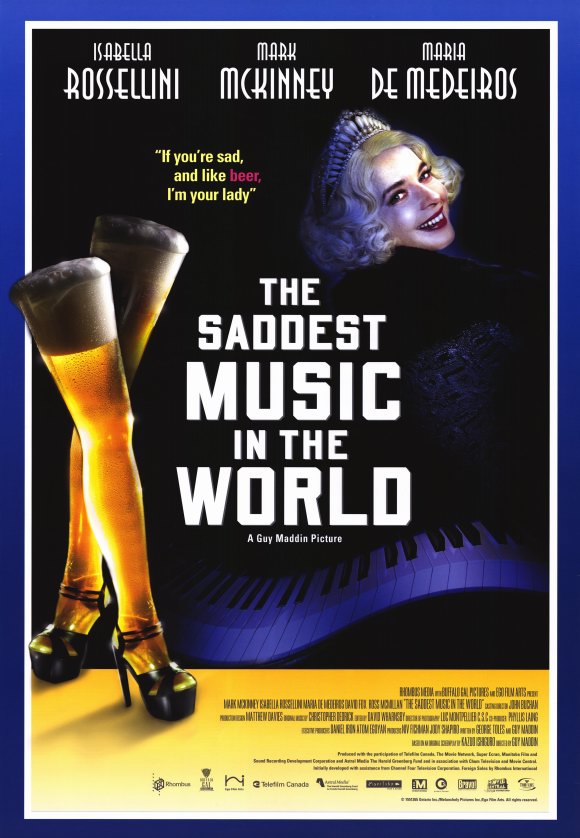 THE SADDEST MUSIC IN THE WORLD

Winnipeg, 1933. The Great Depression. When beer baroness Lady Port-Huntly announces a global competition to determine the saddest music in the world, musicians from across the globe pour into Winnipeg to compete for the whopping 25.000 $ prize. By taking part in this competition, the Kent family confronts the wretched secrets of their past. Chester, a cynical and failed Broadway producer, is ready to mesmerize all with a little bit of American showmanship. His brother Roderick, a cellist who has returned from post-war Serbia, is inconsolable over the disappearance of his beloved wife. Their father Fyodor is tormented with guilt over the accidental amputation of the legs of his one true love, Lady Port-Huntly. To complicate matters further, enter Chester’s latest companion and muse, the otherworldly, nymphomaniac Narcissa.

Maverick Canadian filmmaker Guy Maddin (Twilight of the Ice Nymphs, Dracula) has transformed the screenplay of acclaimed author Kazuo Ishiguro (The Remains of the Day) into a surreal and expressionist tragic-comic fairytale that sweeps you away to a wondrous world of love, lust, loss and beer. Isabella Rossellini (Blue Velvet, Fearless), Mark McKinney (TV’s Saturday Night Live, The Last Days of Disco) and Maria de Medeiros (Pulp Fiction, Stranded) head the cast in this bizarrely beautiful and endlessly inventive homage to cinema.