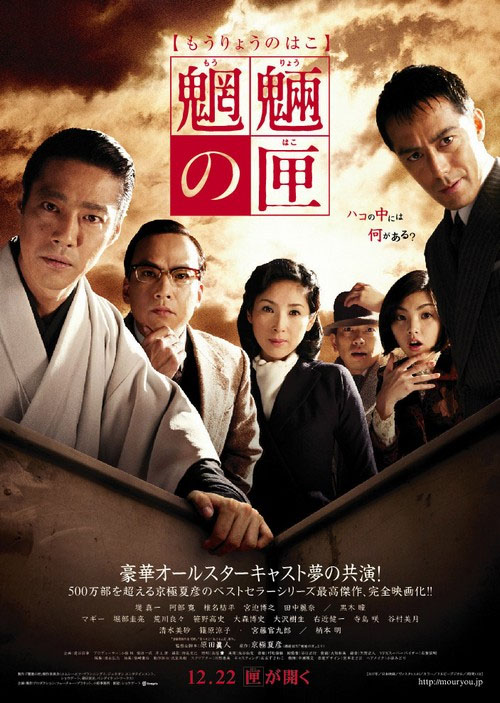 Right after World War 2, a serial killer haunts the streets of Tokyo, targeting beautiful young women. He meticulously cuts the limbs of his victims and puts the torso in a small box, which is then left to be found by a shocked passer-by. When the daughter of retired actress Yoko disappears, she enlists the help of Enokizu, a detective with the supernatural power to foresee the future. At the same time, crime writer Sekiguchi and his editor, Atsuko, investigate a mysterious cult that worships the Spirit of the Box. And detective Kiba is fascinated by a large, box-like building on the outskirts of town where secret experiments were rumored to have taken place during the war. Finally, all our characters meet at the antique bookstore Kyogokudo, seeking help from the owner Chuzenji, who has the power to deal with evil spirits. The Shadow Spirit is a horror mystery based on the bestselling novel of Natsuhiko Kyogoku. We find a familiar Bifff face behind the camera, Masato Harada, of whom we presented Kamikaze Taxi in 1999 and who came to Brussels in 2002 with Inugami. As a great lover of classic American cinema, Harada has made his own Maltese Falcon, but with a decidedly deranged and fantastic twist. The film was shot in Shanghai to recreate the atmosphere of post-war Tokyo and gathers a top-notch cast of Japanese acting talent : Hiroshi Abe ( Adiantum Blue, The Suicide Song ), Akira Emoto ( The Eel, Zatoichi ), Kippei Shiina ( Shinobi, Reincarnation ) and Masatoshi Nagase ( Mystery Train, Electric Dragon 80.000 V ).