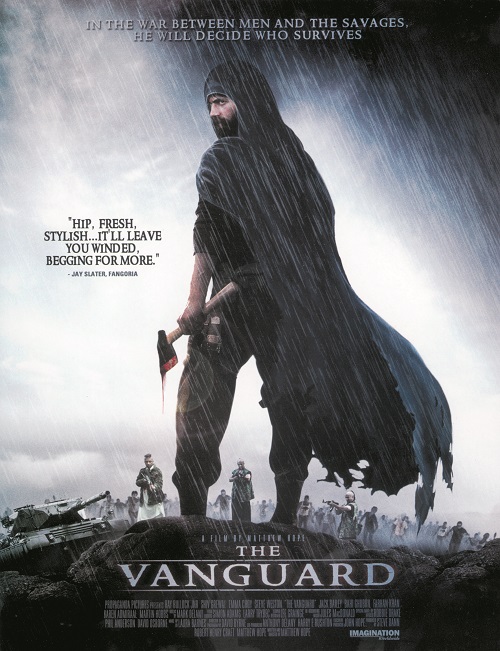 2015, the world is in chaos. The last known oil fields have been vanquished, overpopulation has reached critical levels and mankind is about to become a thing of the past. Out of this apocalyptical nightmare, an entity known only as the Corporation devises a course of action to cull the human race and initialise a depopulation programme. But in a last ditched attempt to save mankind, the scientists tasked with this act revolt and create a drug that reduces humans to a primitive ape-like state, known as Biosyns. Their sight reduced to virtual blindness, the Biosyns rely on scent and sound to survive. But for Max, a young man adrift into the wilderness to live as a hunter-gatherer, they are the enemy. For Max every day is a battle to stay alive. Then the Biosyns begin to evolve, learning first to communicate, then banding together, their vision slowly returning. And they’re coming for Max. Matthew Hope’s directorial debut The Vanguard presents a fresh approach to the zombie genre. It’s an intelligent and exciting film full of pathos and depth. Just as in Romero’s Living Dead series, from where The Vanguard takes its inspiration, Hope uses the genre to comment on the state of the Western psyche, where our herd mentality and our mindless consumerism will lead to the downfall of mankind. But above all, The Vanguard is an unashamedly violent, rough, gory, terrifying thrill ride with some of the scariest most menacingly dynamic zombies ever committed to celluloid.