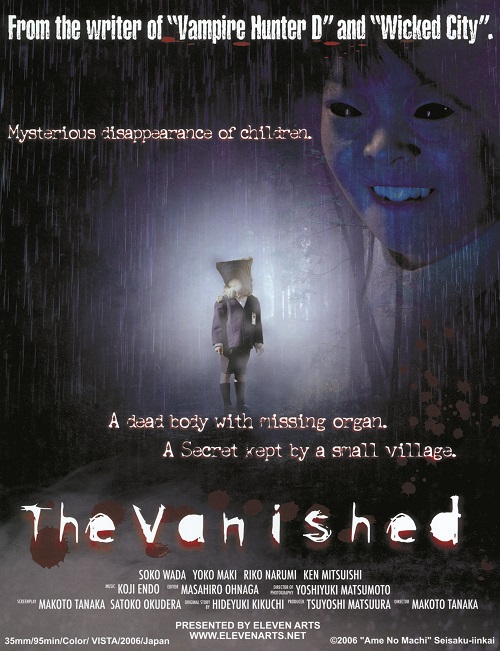 Sota Kaneishi, a freelance writer for a lowbrow tabloid magazine, is sent to a remote village to investigate a case where a dead child’s internal organs are missing. Suspecting that it’s a case of organ trafficking, he visits the doctor who was responsible for the autopsy. However, Sota finds out that the organs were not stolen. They were missing from the beginning ! Mysteriously the dead child escapes from the morgue and disappears. With the help from Fumio Kosaka, a local female officer, they visit the village in order to search for the truth. They find a photo album of children from the now deserted elementary school, taken 35 years ago. One of the children in the album is the dead boy who disappeared from the hospital. Makoto Tanaka, associate producer to Seijun Suzuki’s Pistol Opera ( Bifff 2002 ) and Kazuaki Kiriya’s Casshern ( Bifff 2005 ), makes his feature debut with the scary supernatural tale The Vanished. Scripted by Vampire Hunter D writer Hideyuki Kikuchi and starring Soko Wada (Battle Royale II, Tokyo Noir ), Yoko Maki ( The Princess Blade, Battle Royale II, The Fast and the Furious : Tokyo Drift ) and Riko Narumi ( The Great Yokai War ), The Vanished will certainly appeal to J-horror fans with its zombie children, gruesome murders and a spine-chilling journey.