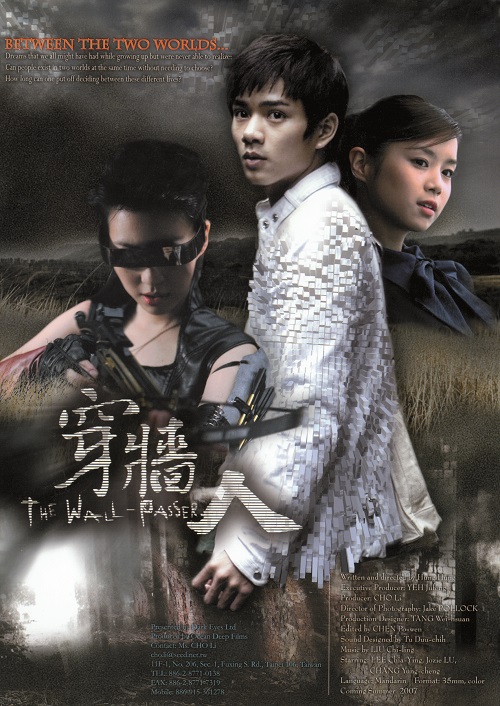 In the not-too distant future, 17 year-old Tye and his family move to the burgeoning metropolis of Real City, where, bored with classes, he spends his time daydreaming until one day he finds a magic stone that allows him to pass through walls. On a field trip to a museum, Tye meets NoNo, a deaf girl with bionic ears who is working as a museum docent. The two grow closer, until Tye discovers she has a boyfriend and demands she chooses between them. NoNo tells him to come and see her again in twenty years and then disappears from his life, leaving him only with a photo of her in front of a signpost saying Elsewhere. Tye uses the magic stone to go to Elsewhere, but he discovers a desolate world full of discarded things, among them an attractive blind girl, Ya-hung. Two worlds, two realities, two girls, what will Tye’s choice be ? Time and space provide no barrier, but there are some things love still can’t overcome in the Taiwanese sci-fi romance The Wall-Passer. Director-screenwriter Hung Hung has delivered a stylishly mounted picture, whose rich visuals create a fantasy world that goes far beyond the movie’s limited budget. Hung’s intriguing story works its way to a poignant end, thanks to some solid performances and a sophisticated look created by the metallic cool blue-gray images, courtesy of D.O.P. Jake Pollock. Ultimately, The Wall- Passer is about the power we all have as children to move freely between real and imagined worlds, a power we seem to loose as adults, but which we still secretly long to find again.