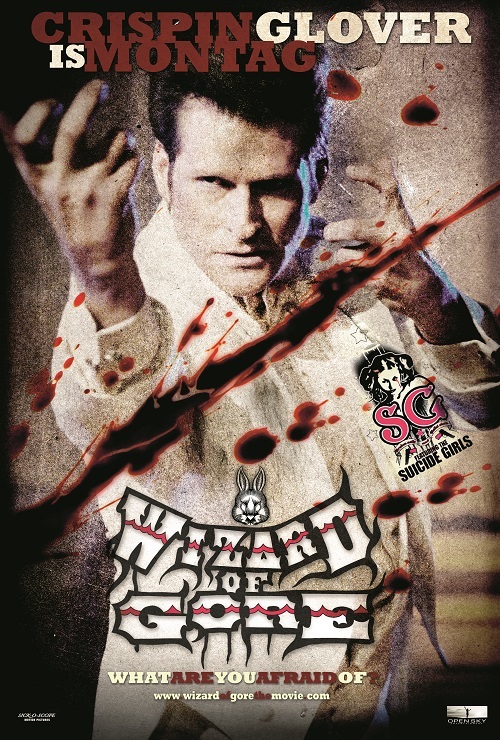 THE WIZARD OF GORE by Jeremy Kasten

Montag the Magnificent is a mysterious magician who stages elaborate Grand Guignol magic shows. During his act, Montag selects a lady from the audience and then proceeds to disembowel, decapitate, immolate or otherwise graphically murder her. Just as the audience is about to flee the theatre, the act is revealed and the victim is displayed unharmed. However, the next day, the previous night’s participants are found dead, killed in a fashion mirroring their stage deaths. Amateur detective Edmond Bigalow, writer, publisher and editor of the Cacophony Gazette, attemps to track down the cause of the mysterious deaths. His investigations lead him to a herbalist pimp, Doctor Chong, a grimy, maggot-eating circus geek and various Suicide girls, who comprise the bulk of Montag’s victims. Horror godfather Herschell Gordon Lewis continues to inspire his young followers. Two year after Tim Sullivan’s 2001 Maniacs, the Bifff can pride itself on presenting Jeremy Kasten’s ( All Souls Day, The Thirst ) The Wizard of Gore. Kasten cultivates a highly atmospheric and weird dark carnival atmosphere. The movie has a stylized, hyper-cool aesthetic, delivers plenty of gore and contains some great performances by Crispin Glover ( Back To The Future, Beowulf, It’s Fine, Everything Is Fine ! ) as Montag the Magnificent, Brad Dourif ( One Flew Over The Cuckoo’s Nest, Dune, Lord of the Rings ) as Doctor Chong, Kip Pardue ( Remember The Titans, Rules of Attraction ) as Edmond Bigalow and genre veteran Jeffrey Combs ( Re-Animator, From Beyond, Star Trek ) as the circus geek.