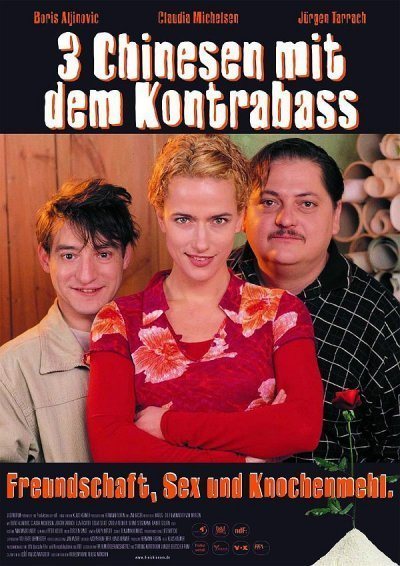 THREE CHINAMEN WITH A DOUBLE BASS

When Paul, a hapless aspiring architect, wakes up after a wild night in town, he finds his girlfriend Gabi dead by their bedside. Panicked, he calls his chum Max, a jolly pathologist with an uncanny pragmatic streak, who rushes to help out his friend. Unfortunately, Gabi died around the time Paul came home, the savvy Max ascertains. Surely an open-andshut case for the police… if they find Gabi. But you can’t just make a body disappear. Especially when Rike, Paul’s strong-headed colleague, darts into the apartment set on getting down to work on the architectural commission they have just won. Or when Rudiger, Paul’s noisy neighbour almost busts them lugging a corpse-filled chest down the stairs. Back in the apartment, Max comes up with another plan. Why not cut up the body, blend it and flush it ? Brilliantly simple, it seems, except that everybody keeps choosing this inopportune time to visit. 3 Chinamen and a Double Bass is a black comedy about how friendship can save your skin… and mince someone else’s. For his long feature debut, German director Klaus Kraemer, could count on the performances of Boris Aljinovic (Tv’s Tatort) as Paul, Jürgen Tarrach (The Princess and the Warrior) as Max and Edgar Selge (Das Experiment) as Rudiger. The hilarious result is both intelligent and thought-provoking. It will also provide you with new unorthodox uses for common household appliances such as a refrigerator, a kettle, a mixer, a saw and a toilet.