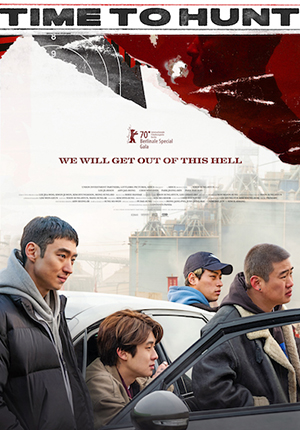 After a three-year stint in prison, Jun-seok can’t wait to pay his two former partners in crime a visit. The enormous loot that got him send to jail in the first place is waiting for him. Sadly, there are a number of things that have changed since his incarceration… Hyperinflation has made the mere idea of living a decent life like an old dream of the distant past. Even an unsliced brown bread now costs a million wons. But Jun-seok is stubborn like a mule. What made him get through his time in jail was the idea of pristine beaches and emerald seas… There is no way that he’s going to abandon that dream for some miserable brown bread that he has to slice himself. So, he plans a heist on the only place where there’s still some money: the clandestine casinos… that are also used as money laundries for the real leaders of this world in ruins. TIME TO HUNT is a crispy cold Korean dystopia about a world in (de)construction, where desperation has taken the place of greed. It’s a dark poem and a futuristic western. This film by Sung-hyun Yoon is the true successor of HEAT, transforming a hopeless world into an endless urban guerilla.