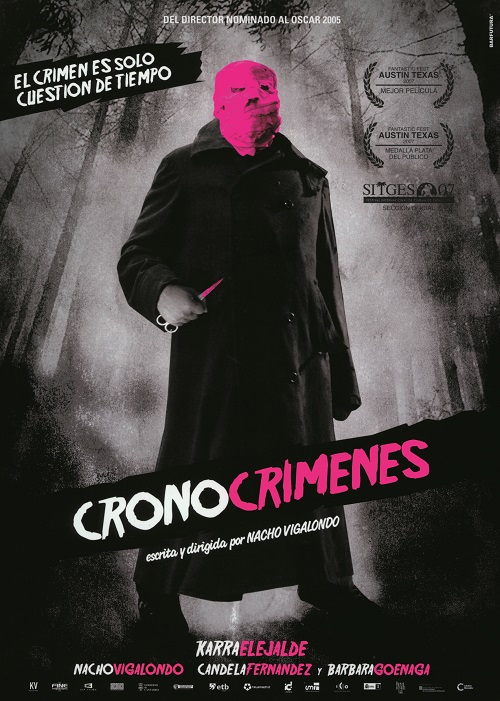 Hector is staying in a country house in northern Spain with his companion, Clara. As he drives toward the place, something falls out of the trunk. When he gets out to investigate, he sees movement in a forest clearing opposite the house. Through his binoculars, he catches sight of a girl removing her clothes. Hector decides to investigate further, but when he reaches the girl, she’s not only naked but unconscious. As he stands over her, he’s stabbed in the arm with a pair of scissors by an attacker with a long coat and a bandaged head. Hector flees to a seemingly abandoned mansion, which turns out to be a research lab. He meets a scientist, who tells him he can hide from his attacker in a large, pod-like contraption. When Hector emerges from it, he looks back across the valley he came from and sees himself peering through his binoculars. The long feature debut of Spanish actor, writer and director Nacho Vigilando proofs that exciting time-travelling stories can be made on a small budget with the right script. Timecrimes combines a B-movie plotline with precisionengineered writing and a sober style. Add to this an engagingly, nonplussed hero, a terrific performance by Karra Elejalde ( The Red Squirrel, The Nameless, They’re Watching Us ), who remains undisturbed by the time-bending antics in which he finds himself. Timecrimes is a very clever and fast paced movie, successfully enveloping the viewer in its deranged logic, while the time-shifting creates such an intriguing puzzle that you’ll want a second viewing to search for the missing pieces.