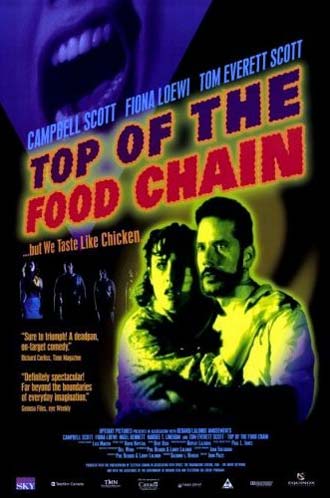 TOP OF THE FOOD CHAIN

Exceptional Vista may once have been a town with a view, but since the Nut Factory closed down there hasn’t been much worth looking at. No longer able to boast of living in the place that turned out “the finest damned nuts in Canada” folks kind of drifted away. All that’s left is the General Store, which boasts the region’s finest shelf display of “adult literature”; the Fawkes Den Motel, first prize for the least visited motel in North America; and a skeleton staff of self-appointed law-keepers that talk all day about the only two topics that interest the remaining inhabitants : television and sex. A momentary distraction is offered when atom scientist Dr. Karel Lamonte shows up in Exceptional Vista. He immediately becomes the object of passionate affection for Sandy Fawkes, the local town vamp. Then suddenly, one morning, the power goes off and, with it, the Tv. Even with generators, the small screen stays dead. It gets worse. Pretty soon, people begin to disappear… or bits and pieces of them do. Chewed remains are being found. In the words of Guy, a local boy who wasn’t first in line when brains were being handed out : “It’s like some kinda… some kinda… big eating thing is going on”.
It seems like something has replaced man on top of the food chain in this movie by the same name. Canadian director John Paizs (Crimewave) and veteran comedy writers Phil Bedard and Larry Lalonde have created a hilarious and gory spoof of all those old sci-fi movies of the fifties. Once you’ve seen them, you know what they are about. Monsters turn up to threaten the earth and a scientist talks a lot of gibberish that you don’t understand, but it always seems to have something to do with atomic radiation. Tom Everett Scott (Big Night, The Spanish Prisoner) plays Dr. Lamonte, the earnest scientist who tries to explain away the alien monsters and man-eating blobs. Campbell Scott (That Thing You Do, American Werewolf in Paris) is small-town simpleton Guy. Sandy Fakes, a girl who seems to have picked up her ideas about love from watching too much television, is a part by Fiona Loewi (National Lampoon’s Senior Trip, Love and Death on Long Island).