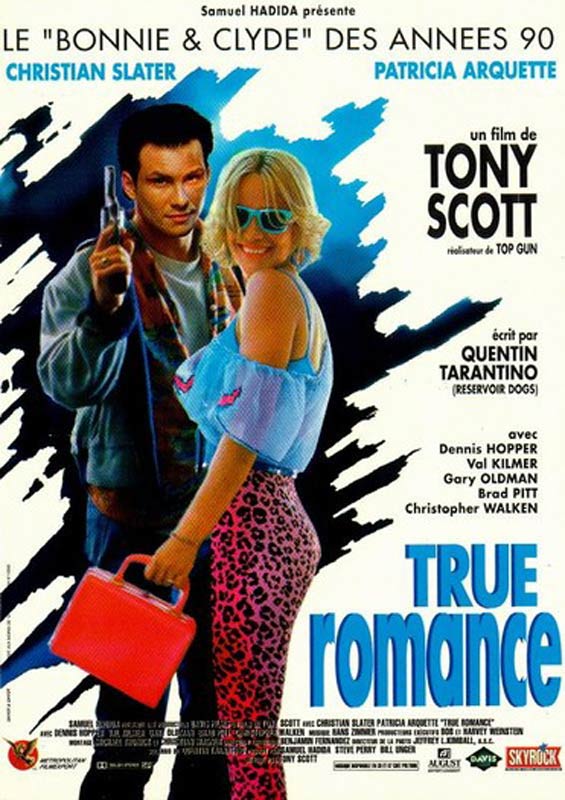 First, there is Clarence Worley, a comic book salesman, comic book eater and almost a comic book character himself. He is as mad as a hatter and passionate about karate films and Elvis the Pelvis. Secondly, there is Alabama Whitman, an ambitious and passionate girl, who makes a living as a lady of the streets. Clarence + Alabama = FIREWORKS! The two become steeped in each other. After a crime, committed in their youthful hubris, they flee together for a hellish trip from grey Detroit to sunny L.A. In the boot are several kilos of coke simmering, a load coveted by many ugly and sinister people. The father of Clarence (Dennis Hopper), an old policeman, wants to protect his wild son. The white Rasta dealer (Gary Oldman), who imagines himself to be black, sees the fake nosebleeds shining before his eyes. And there is an experienced mafioso (Christopher Walken), who has not cold-cocked anyone in 10 years.

True Romance is the explosive result of the collaboration between the sophisticated Brit Tony Scott (Top Gun, The Hunger) and the new Hollywood prodigy Quentin Tarantino (Reservoir Dogs). Tarantino stands for spectacularly tough dialogue from real-life cartoon characters, larded with masses of references to the music and films of the seventies. Add to this the visual flair of Tony Scott, who for the first time in his career was granted the right to a final cut, and you have a film that makes your mouth water. The final blow is delivered by the rows of brilliant actors. Christian Slater (Singles) and Patricia Arquette (The Indian Runner, Trouble Bound) as the Bonnie and Clyde of the 90s. Dennis Hopper (Easy Rider, Blue Velvet) is the father, Gary Oldman (Dracula, Prick Up Your Ears) the dealer and Christopher Walken (At Close Range, The Milagro Beanfield War) the Mafiosi. Without forgetting Val Kilmer (Top Gun, The Doors), Brad Pitt (Thelma & Louise, Arizona Dream) and Chris Penn (Reservoir Dogs).