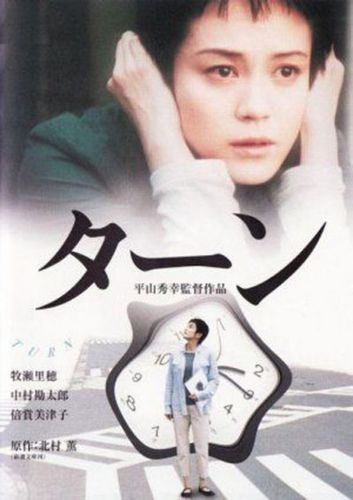 Maki is a young woman who tries to establish herself as an artist in copper-plate etchings. After she manages to place one of her works at a local gallery, she is hit head-on by a dump-truck. Maki wakes up lying on a deck chair inside her house. When she goes out, she finds herself in a completely empty city. A day later, at the same time, she wakes up in the same deck chair and rea-lizes she must have died. Now Maki will have to spend eternity alone, “turning” each day at 2.15pm and living the same 24-hour period over and over. Back in the real world, Yohei, a young artist, has bought her copperplate, which he wants to use for a series of books he is designing. He phones her, and amazingly, the call gets through. Maki persuades him to leave the line engaged and they agree to talk every night. Yohei soon disco-vers that Maki is not as dead as she seems to be. Everybody thinks from time to time that they’re alone in the world, but in Turn this actually happens to its protagonist, finding herself alone in Tokyo, the busiest and most crowded city in the world. Acclaimed director Hideyuki Hirayama, whose Begging for Love won the Film Critic’s Award at the 1999 Montreal Film Festival and the Japanese Academy Award for Best Picture, has created a heart-warming story about the lack of communication in a high tech, impersonal society. He can count on a strong performance by singer-actress Riho Makise as Maki.