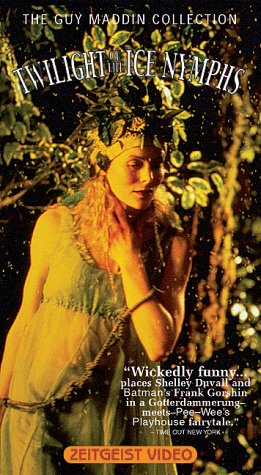 TWILIGHT OF THE ICE NYMPHS

Peter Glahn, a former political prisoner, returns after several years of incarceration to his homeland of Mandragora, where the sun never sets. While on the boat taking him home, Peter spends a few precious minutes in the enticing and rarefied company of Juliana, a beautiful young woman with whom he falls desperately and immediately in love. He disembarks to find the sun-addled Mandragorans engaged in a whirlpool of smoldering passion and romance: his ostrich-farming sister is sick with heartache for the mesmerist Dr. Solti, who, in turn, is passionate about both a newly uncovered statue of Venus and Zephyr, a fisherman’s widow. Zephyr, for her part, gives herself to Peter, but he can think of no one save Juliana, who is strangely connected to the haughty Dr. Solti.
Winnipeg-based Guy Maddin has crafted one of the most confounding and delirious bodies of work in film, beginning with his first feature The Death Father. In 1995, Maddin was awarded the Telluride Film Festival, the youngest person ever to receive the honour. His latest film, Twilight of the Ice Nymphs, is a dream-stuck hallucinatory fantasy of unrequited love, madness, murder… and ostriches.