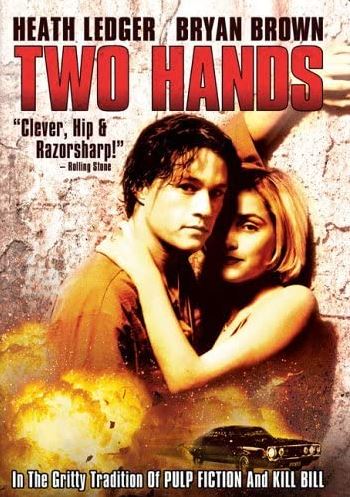 Jimmy, a 19 year old ex-street kid and aspiring hooligan works at a Kings Cross strip club when he not only gets his big break into the world of crime but also meets Alex, the girl of his dreams. Local drug dealing gangster Pando asks Jimmy to act as a courier. He is sent out on what seems to be a simple job. However, it all goes horribly wrong when a twist of fate sees two street kids, Helen and Pete, stealing his ten thousand gangster dollars. Now Jimmy has to pull his first bank job to avoid the bullet. Australian writer-director Gregor Jordan started writing Two Hands when he had just completed Swinger, his debut short film that won First Prize at the Tropicana Short Film Festival in Sidney and the Jury Prize at the 1995 Cannes Film Festival. Inspired by his love of gangster movies such as The Godfather and Goodfellas and by a morbid fascination with the local crime scene, he created a black comedy gangster film with a supernatural subplot. American Tv-actor Heath Ledger plays tough and charismatic Jimmy. Veteran actor Bryan Brown (Breaker Morant, Gorillas in the Mist, Coctail) is Pando and Rose Byrne plays dreamgirl Alex.