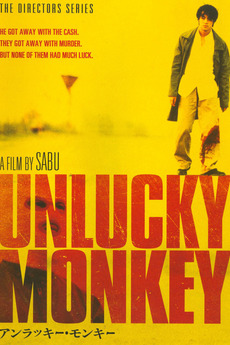 Nishida and Yamazaki, two less than confident would-be bank robbers, are heading for the bank they plan to rob. It’s a fateful day for them. When they get to the spot, they find out that another robber has beaten them to it and is fleeing with the loot. As ill luck would have it, both Nishida and the robber are knocked down by a car and the money unexpectedly falls into Yamasaki’s hands. Yamazaki panics and runs, making his escape through the back-streets. Turning a corner at high speed, he collides with a young hairdresser and accidentally stabs her to death. Made a robber and a murderer by a whim of fate, the luckless Yamazaki starts to wander aimlessly through town.
Sabu, one of Japan’s hottest young filmmakers, is back with his latest off-beat action movie. After his explosive debut, the gripping D.A.N.G.AN. Runner, he became famous with his second feature Postman Blues, one of the most successful releases in Japan. With Unlucky Monkey, Sabu goes beyond the action-driven plots of his earlier films and emphasises the inner turmoil of his characters, as they find themselves trapped in a nightmare without relief.