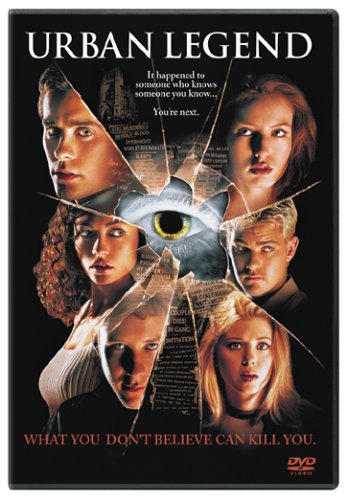 Urban legends are contemporary folk tales, bits of macabre mythology that emerge from the underground and take on colourful lives of their own. Like a virus they spread quickly, becoming firmly wedged in our collective consciousness. Now, at New England’s Pendleton College – just named the safest university in the country – someone is making classic urban legends come true, with fatal results. But who’s doing it and why ? According to Pendleton’s American Folklore instructor, Professor Wexler, these tales are said to contain hidden moral lessons for their victims. Unfortunately, some of us have to learn it the hard way. First, student Michelle Mancini loses her head, courtesy of a well-sharpened axe. Then the campus’ practical joker Damon is left dangling from a tree. Beautiful and assertive student Natalie suspects a bizarre link between the murders. Soon, one by one, students, faculty staff, even pets are dying off in a variety of sadistic and wickedly flamboyant ways. Unfortunately, Natalie’s friends are too preoccupied with other things to consider the deaths might be more than coincidence. Meanwhile, the body count keeps going up…
Mutant crocodiles in the New York sewers, the guy who wakes up and finds out that his kidneys have been stolen, the family whose grandmother dies on vacation and drive back home with her body in the trunk… etc. The stories are completely false, but everybody believes them, because they heard it “from someone who’s heard it from someone”. These urban legends are the subject of an exciting new horror thriller from Australian debut director Jamie Blanks. The film stars Robert “Freddie” Englund (Nightmare on Elm Street, The Mangler, Wishmaster) as professor Wexler. Alicia Witt (Four Rooms, Mr. Holland’s Opus) is hot on the trail of a horrible killer as enterprising student Natalie. Among her unbelieving friends are Jared Leto (The Thin Red Line) as Paul, an aggressive student journalist who’s only interested in a story that will bring him eternal fame; Rebecca Gayheart (Nothing to Loose, Scream II) as best friend Brenda, whose concern for Natalie is put aside by her flirting with Paul and Tara Reid (The Big Lebowski) as Sasha, the host of a sex advice show who’s more interested in exploring the Kama Sutra with her boyfriend, than with the impending danger. James Chressanthis (Kingdom of the Blind, Judas Kiss) took care of the photography and Christopher Young (Hellraiser, Copycat, Species) composed the music.