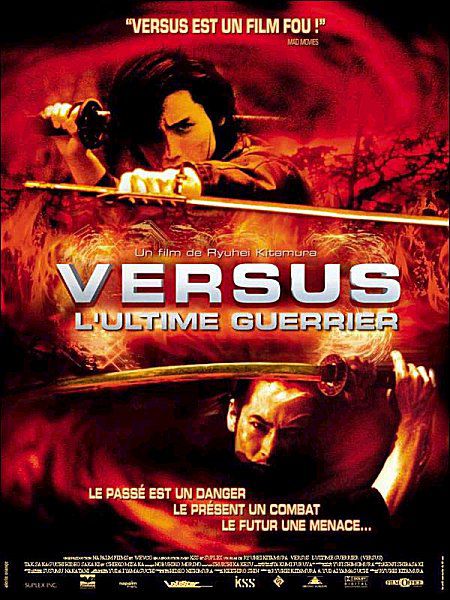 In the mystical forest of Resurrection, the spectacular battle between good and evil has gone on since the beginning of time. When prisoner KSC2- 303 escapes from maximum security, he enters the forest for a rendezvous which he believes will lead him to a safe haven. Instead, he discovers that he is a pawn in an endless fight played out against an everchanging background across multiple temporal planes. His opponent: a mysterious man of supernatural power who seemingly cannot be killed. The battle being waged between these warriors: good versus evil in the pursuit of a beautiful woman who holds the power to grant eternal life. But what prisoner KSC2-303 cannot remember, is whether he is the personification of good or the very essence of darkness. Versus, directed by Ryuhei Kitamura, is a wild collision of genres. It has taken its inspiration from samurai films, the gunplay of Sergio Leone and Quentin Tarantino, Hong Kong kung-fu movies, wire stunts and zombie flics. As a specialist of micro-budget short movies with titles like Exit, Down to Hell and Heat After Dark, Kitamura has delivered his debut long feature with plenty of visual panache and actors relishing in the hyper-violent action. This crossover between Bad Taste and Evil Dead, delivers two hours of uninterrupted action and gore. Versus, a delirious cocktail of swords, shots, acrobatic leaps and witchcraft, is a cult-film to be.