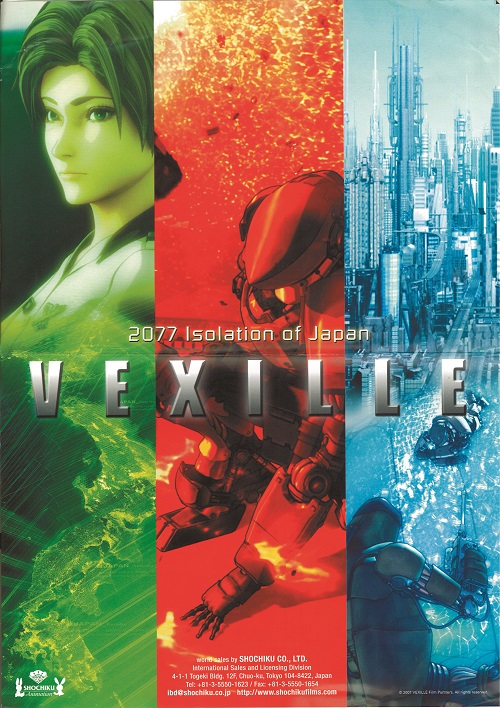 In the future, the use of robotic technology to augment humanity becomes troubling to the global community. The UN passes a resolution declaring the use of android technology forbidden, a resolution signed by all member states except one. Japan refuses to accept the treaty, opting instead to adopt a new policy of national seclusion. The country withdraws from the UN, expels all foreigners from the country and installs an electronic shield that scrambles any sort of electronic or satellite surveillance. Japan simply falls off the map. No one comes in or out for ten years. Then information leaks out that something is happening in Japan that could pose a threat to the rest of the world the group. An elite military team, led by major Vexille, is sent to infiltrate the country and neutralize the threat by any means necessary. One of the most eagerly anticipated anime titles of the year, Vexille is nothing short of a visual feast. The production team behind Appleseed has reunited for a high concept, high action sci-fi thriller. Appleseed producer Fumihiko Sori sits in the director’s chair this time. Besides presenting us with a spectacular and high powered action adventure, Sori is also clearly concerned about the current state of Japan. He asks some serious questions about human nature, about what makes us human on the most basic level and the ways in which we endanger our own humanity through our reckless greed. Vexille is an anime that underpins its entertainment with high minded concepts and serious concerns that will ensure it remains engaging and challenging for quite some time.