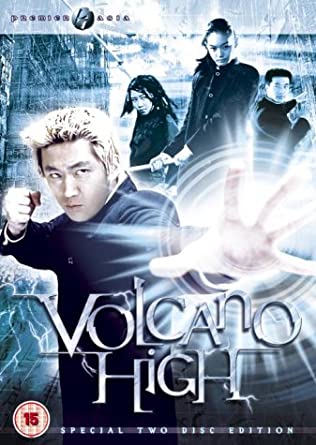 In a time that is neither the past nor the future nor the present, mysteriously hanging above the obscure boundary of the real and the unreal is the school, Volcano high. In the classrooms, chalk flies like bullets. On the playing fields, students and teacher hang in the air, practicing martial arts against each other. Incidents such as tea leaves becoming the shape of dragons and moving around or windows in the hallway suddenly shattering into bits are not surprising at Volcano High. Then, 108 years after its founding, a stupendous student transfers in. He is Kyung-soo Kim, already expelled from eight schools because he cannot control the power that he is gifted with. He is determined to graduate, no matter what happens. But there are many students eager to challenge the new kid on the block.

The Korean blockbuster Volcano High is a manic, manga-style mixture of frenzied fight sequences and hysterical comedy that makes Crouching Tiger, Hidden Dragon look like a relaxed stroll in the park. Director Tae-gyun Kim has given his film a highly stylised baroque background and uses extreme close-ups, slow motion and speeded up action and over-the-top performances to accompany the adrenaline rush of the spectacular magical combats.