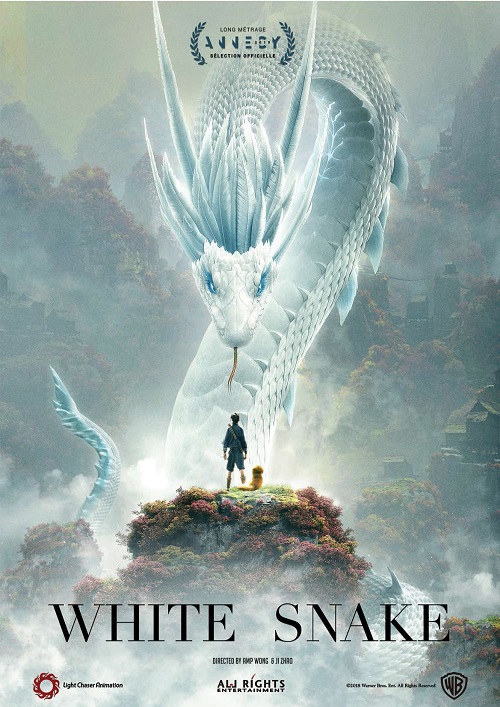 Finding love in ancient China wasn’t always easy. One day Xuan (Tianxiang Yang), the poor devil falls head over heels in love with Blanca (Zhe
Zhang), an angelically beautiful girl… that also happens to be a
fierce white snake demon. Of the kind that occasionally turn into a
big-ass snake and terrorizes his cute little village. Blanca doesn’t
usually date humans, especially snake-catchers like Xuan – a real
turn-off – but he’s so damn adorable… The thing is, she doesn’t quite remember being a demon after getting beat up by the Dark General, who needs snake skin – and a lot of it! – for his black magic schemes. Torn between two worlds; will their forbidden love survive? Romeo and Juliet anyone? Yeah, except with gigantic snake battles, evil overlords, a kinky fox demon lady and her creepy dwarf servants, reincarnation and… a talking dog called Dudou. If the yin of WHITE SNAKE is Studio Ghibli, than its yang is Disney: intelligent, moving, truly imaginative but with enough goofy, fun characters to keep the kids laughing and frolicking throughout. Add to that a pinch of Dragon Ball Z – because epic demon monsters call for epic battles –, cross it with a classic Chinese folktale and you’ve got quite a spicy dish! The ultimate selling point however is how unbelievable the animation work is, full of detail and movement.