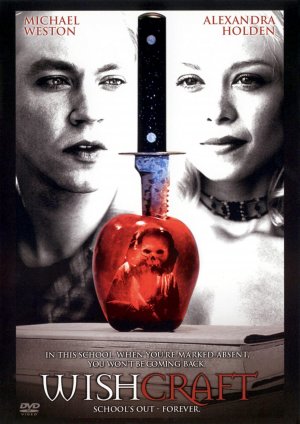 Life’s about to change for Brett Bumpers, Martin Van Buren High School’s resident brain. Socially inept and head-over-heels in love with Samantha, the school’s most beautiful girl, Brett receives a mysterious package and a dark gift; the power to make three wishes. Against his better judgement, Brett makes Samantha fall in love with him. But even as the Prom Queen and Nerd cause a scandal by appearing at the Spring Dance together, a shadow is cast over the school. One by one, Van Buren High’s most popular students are dying, victims of a supernatural killer. Cloaked in shadows and set on revenge, the killer stalks jocks and cheerleaders late at night. As the local police bear down on the High School, Brett starts to wonder. Is there a connection between the killer and his new power? Is Brett a target or could this phantom be his guardian, the Keeper of the Wishes? Wishcraft is a teen slasher that doesn’t take itself too seriously, but relishes in the conventions of the genre and will guarantee you an entertaining dose of frights and fun. Richard Wenk (Just the Ticket, Attack of the 5’2 Women) directs a cast that includes Michael Weston (Numbers), Austin Pendleton (Fast Food, Fast Women), Alexandra Holden (Sugar and Spice, Drop Dead Gorgeous) and Meat