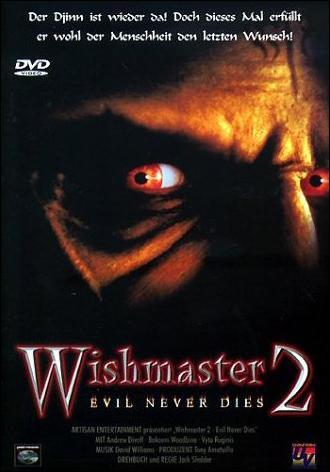 Last year, the Djinn got a first taste of our era. To him it became a decadent and diabolically fascinating experience. This perfidious demon got more than enough opportunities to play his perverse magic lantern game with us. The Djinn fulfils our innermost desires, but he always demands retribution : our soul. And because modern man always want what he can not get, the Djinn is never without work. So it comes as no surprise if I tell you that the demon has escaped the prison in which he was cast at the end of the first movie. Once more, the Djinn wanders among us. Watch out, you might not want what you wish for.
Wishmaster II : Evil Never Dies is clearly of a better vintage than its predecessor, which – despite Wes Craven as producer – lightly disappointed horror fans. This time Jack Sholder has directed the adventures of the Djinn. Sholder has made movies such as Nightmare on Elm Street II : Freddy’s Revenge, the excellent The Hidden (at the festival in 1988) and 12:01, our Prize of the Audience 1994. Once again, Andrew Divoff (Air Force One, The Hunt for Red October, Another 48 Hours) plays the Wishmaster. And this time, actress Holly Fields (Communion, The Big Picture, Seedpeople) will have to face the resourceful demon.
U.S.A.
131
Belga Film Belgium & Artisan Films presents at the
Brussels International Festival of Fantasy, Thriller & Science-fiction Films
World Première
AUDITORIUM