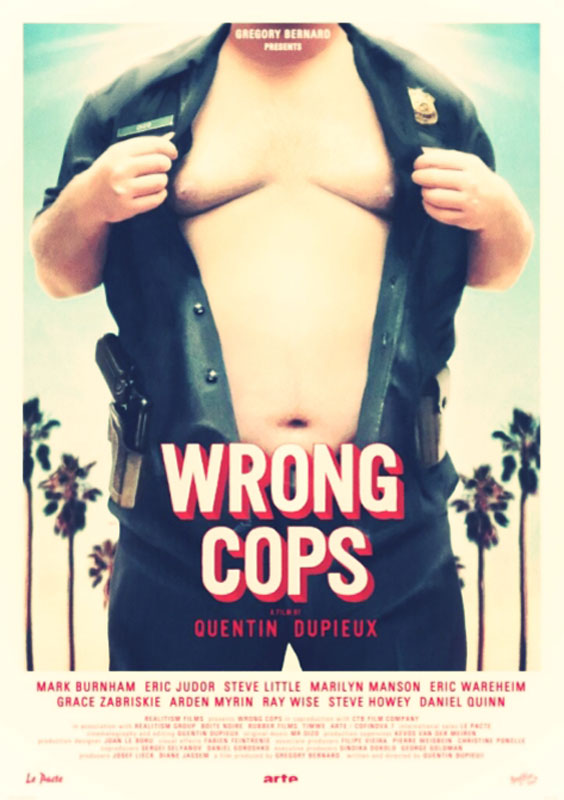 In the near future, crime is only a vague memory in Los Angeles. The cops don’t know what to do with their time. They’re so bored; they’re willing to do the craziest things to stay occupied. One of them is Duke, who delivers all kinds of services against payment in cash or blowjobs. He also deals marihuana on the side, with his clients getting their stuff stashed in the stomachs of dead rats. Duke considers himself to be a true music lover. One day he takes a teenager to his apartment to educate him in what a good tune is all about. Dancing in his underwear, he sings at the top of his lungs. The kid doesn’t really appreciate Duke’s teachings and runs away. He fires a few shots at the fleeing ungrateful, but manages to hit one of his neighbors. A murder in L.A.! Nobody knows what to do. After the monosyllabic gems Steak, Rubber and Wrong, Quentin Dupieux dares to deliver a film with two words in the title! Just like its illustrious predecessors, Wrong Cops is an absurd and surrealist mosaic that clearly carries the mark of its enigmatic and willful maker. Dupieux’s politically incorrect films always go against the stream, perverting and turning upside down the pillars of our society. With a remarkable guest appearance of Marilyn Manson as a semi-autistic adolescent.