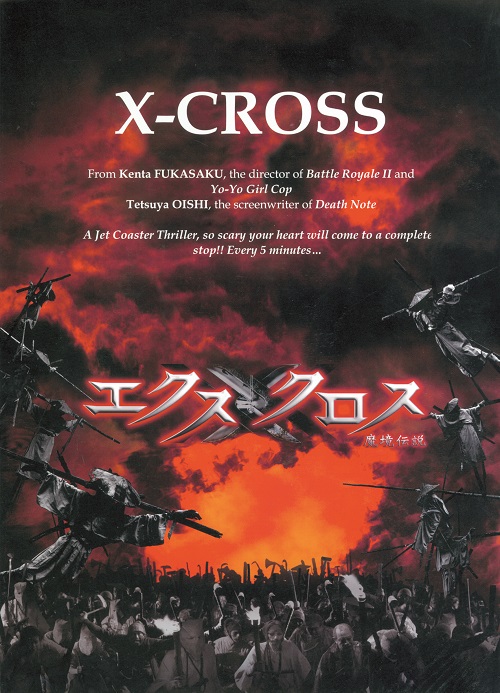 Shiyori is a college student who just broke up with her boyfriend. Her friend Aiko invites her to visit Ashikari, a remote hot spring village, to mend her broken heart. However, scattered throughout the village are strange, one-legged scarecrows and the atmosphere is downright ominous. At night, the two girls have a fight over Shiyori’s ex-boyfriend. Shiyori takes her cell phone to the waterfall and, hoping to forget all about her former lover, throws it in. Returning to her room alone, she hears another cell phone ring. She answers a call from a terrified man who shouts « Just get the hell out of here ! They’ll cut your leg off ! ». The stranger then begins to tell her about the ancient rituals still practised in the village. Who is this man ? Is he just teasing Shiori ? And why dit Aiko bring her here ? Not knowing who to trust, she rushes out of her room, the cell phone in her hand, to escape the villagers who are hot on her trail. From Kenta Fukasaku, director of Battle Royale II and Yo-Yo Girl Cop, and Oishi Tetsuya, screenwriter of Death Note, comes a roller coaster horror thriller that is guaranteed to make your heart stop a few times. Shock and awe are generously served in X-Cross, which lures us in thanks to its outlandish flashback structure and provides us with plenty of grisly details about ritual sacrifices and one giant pair of scissors. This scary movie can further count on enjoyable performances from Nao Matsushita ( Adiantum Blue ), Ami Suzuki ( Rainbow Song ) and Shoko Nakagawa ( The Fast and The Furious : Tokyo Drift ).