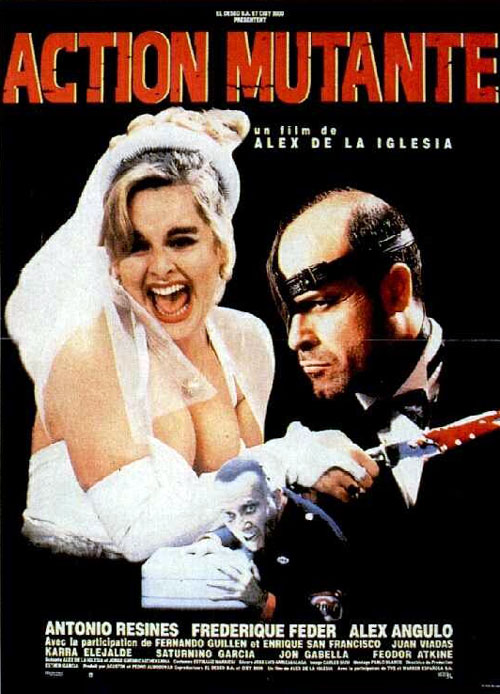 Madrid, in the future. The world is dominated by stylists and golden boys. The terrorist group Accion Mutante fights the system alone and demands the right to ugliness. Ramon, the group’s leader, gets out of jail with an amazing idea: to kidnap Patricia Orujo, the daughter of the King of Fast Food. Accion Mutante decides to strike on her wedding day. The terrorists appear suddenly from the wedding cake, in front of the horrified guests and after bloody gunshots, they take their captive away on their spaceship. The exchange for the ransom must take place in the only bar of the planet Axturias, whose inhabitants are all miners who have not seen a woman for twenty years.
On their way, Ramon betrays and kills his companions from Accion Mutante. While the ship crashes on Axturias, Ramon ends up alone with Patricia, who has, in the meantime, fallen in love with him, because of Stockholm syndrome. However, their tranquility will quickly end: Orujo is furious and determined to get his daughter back.

For his first feature, Alex de la IGLESIA benefited from the support of a renowned producer: Pedro ALMODOVAR (HIGH HEELS, MATADOR, WOMEN ON THE VERGE OF A NERVOUS BREAKDOWN…), whose personality leaves a visible mark in the film. He describes ACCION MUTANTE as «a gore parody, between HARDWARE and DELICATESSEN”. Besides, the “cocktail” of special effects is a creation of the French team of this last film. For the rest: apocalyptic settings, satirical and highly corrosive scenario and tone, and everything is surrounded by violence and a highly pleasing bad taste. For this production, the ALMODOVAR brothers, both producers, associated with Ciby 2000, Francis Bouygues’s company. As a result, the film received a budget particularly significant (for a first feature), as well as exceptional special effects.