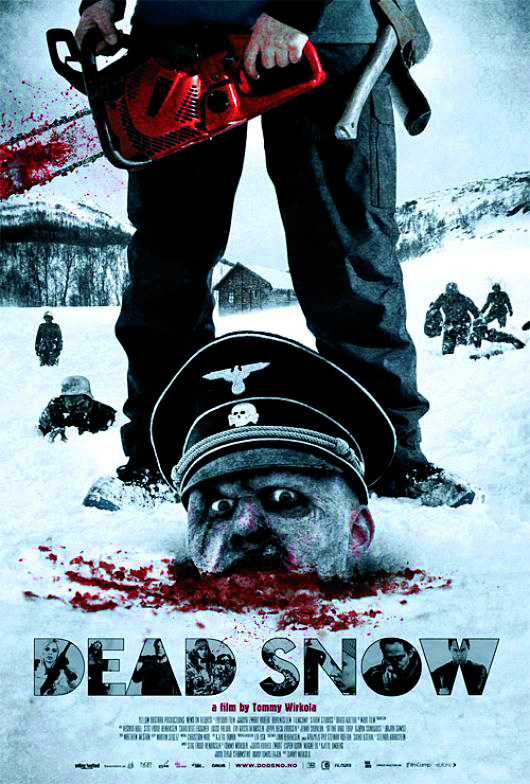 Norway at the end of the Second World War. The inhabitants of the village of Oksfjord rise up against the looting Nazi occupiers and drive them into the mountains, where they supposedly all freeze to death. 60 years later, eight medical students are on their way to a cabin nearby Oksfjord for a weekend in the snow, fuelled by beer and youthful hormones. The party’s interrupted by the visit of a grumpy local guide, who scares them with tales of mysterious disappearances in the area. When they discover a box filled with valuable coins under the cabin floor, the fun is really over. Hordes of Nazi Zombies claw their way out from under the snow to sink their teeth into our unfortunate heroes. The US of A used to be the measure for all things gore, slasher or zombie. But in recent years, “Old Europe” has been successfully nibbling away at this Yankee supremacy. You can now add another title to the ever increasing list of European genre killers : Dead Snow ! Tommy Wirkola, notorious for his Kill Bill parody Kill Buljo, manages to serve us a cocktail in which the three main ingredients – horny youngsters, undead brain eaters and lots of snow – have been mixed to perfection. Dead Snow : 450 litres of blood, enough intestines to pave the way from Oslo to Brussels and legions of Nazi zombies to chop into little pieces !