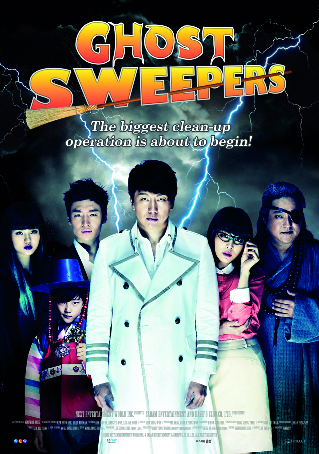 Chan-young, a young journalist fallen in disgrace, has to lie low for a moment. She’s sent to cover a minor story in the countryside about a gathering of shamans. According to the beliefs of the local hillbillies, the village where the meeting is held is supposedly possessed by a bunch of grizzly demons. Yeah, right… Rumors even say that the incidents have been so terrifying that the local gurus have abandoned the place. But when the group of shamans begins their ritual, a strange eerie force pops up and evil spirits begin to attack the team. The dark forces are so powerful that all third-rate exorcists vote with their feet and run off! Only five shamans remain, along with Chan-young. This all-star team of supernaturally-inclined heroes will prepare themselves for an epic battle against the village’s evil forces. Master of comedy horror Shin Jung-won is back with his third feature. After To Catch a Virgin Ghost ( 2004 ) and Chaw ( 2008 ), Ghost Sweepers will undoubtedly once again smash the local box-office. His new hit, built like a tremendous leisure park dedicated to exorcism, is a real treat to movie buffs !