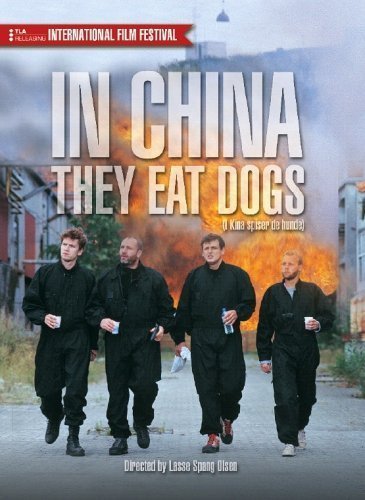 IN CHINA THEY EAT DOGS

Arvid and Harald are brothers. But there the resemblance ends. Arvid is a stuffy bank clerk. Harald is a tough crook. One day, Arvid becomes a hero by thwarting a bank robber. But by doing so, he discovers that he has tampered with somebody else’s destiny. Now he has to make amends, which will require Harald’s help. Harald wants to do his fraternal duty and put his skills at Arvid’s disposal. In no time at all, aided and abetted by two cooks and a reluctant Yugoslavian migrant, they rob a security van. But that just proves to be the start of Arvid and Harald’s criminal and charitable career, which turns out to be long and bloody until higher powers step in to take stock of the death toll. In China They Eat Dogs could be called the first Danish black gangster comedy. It was written by Anders Thomas Jensen (Mifune’s Last Song, Beyond, The King is Alive) and directed by Lasse Spang Olsen. Olsen is a man of many trades. He’s been a cameraman, a stuntman, a stunt-co-ordinator on over 250 films and a film director with Operation Cobra. His second long feature proved to be a huge box office hit in Denmark, where it was compared with Pulp Fiction and Lock, Stock and Two Smoking Barrels. You’ll no doubt also enjoy this rip-roaring story packed with armed robbery, explosives and sudden death. And best of all, it’s all perpetrated with the best intentions.