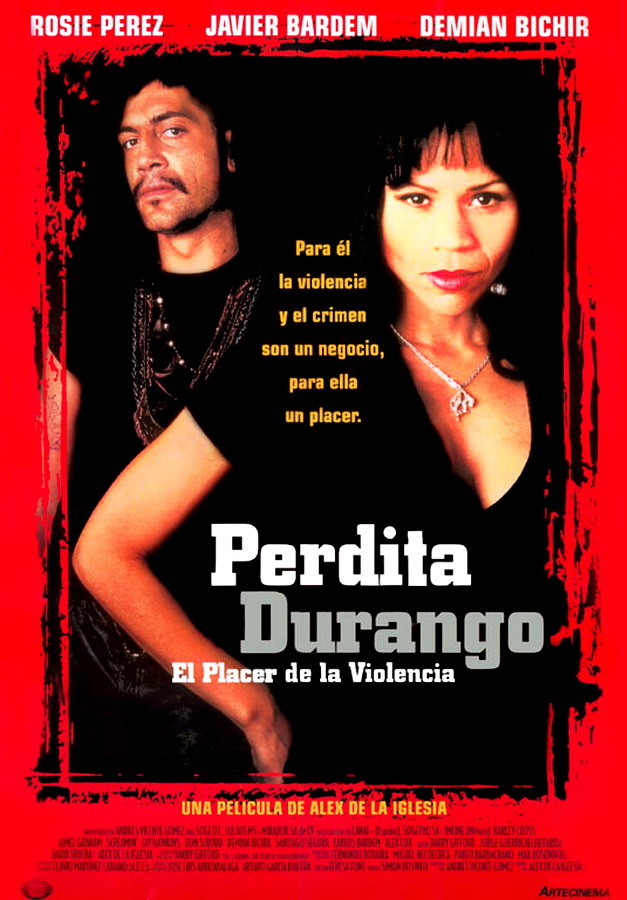 Perdita Durango is a dangerous young woman. Each night she dreams about a jaguar that licks her naked body and sleeps by her side. Dark, sexy and totally shameless, she loves taking people for a ride and living life to the limit. She hauls behind her a past bathed in blood and weird passions. Romeo Dolorosa is a tough, captivating individual. Each day he recalls some anecdote or other from his tropical childhood. Dark, sensual and highly daring, he combines robbing banks with the trafficking of corpses and illicit substances, spicing it all with “santero” rituals and fantastic legends. One fine day, the destinies of Perdita and Romeo come together, and no-one or nothing can put a stop to it. This duo, beautiful and in love, spend their time hopping from one side of the Mexican border to the other, adding to their tally of crimes and making new enemies along the way. They are determined to become the most feared outlaws in the territory.
Perdita Durango is the third feature film of Spanish director (and Festival regular) Alex De La Iglesia. After his sci-fi black comedy Accion Mutante (92) and his second film The Day of the Beast (awarded with the Grand Prix, The Award of the audience and the Grand Prix of the European Jury at our Festival in 96), De La Iglesia brings us a new black comedy, a road movie this time. Rising star Javier Bardem (who starred in Bigas Luna films as Jamon, Jamon and Huevos de oro and Pedro Almodovar films as Tacones Lejanos and Carne trémula) plays Romeo Dolorosa. Rosie Perez (Fearless, It Can Happen to You, Somebody to Love) stars as half Texan and half Mexican Perdita Durango.