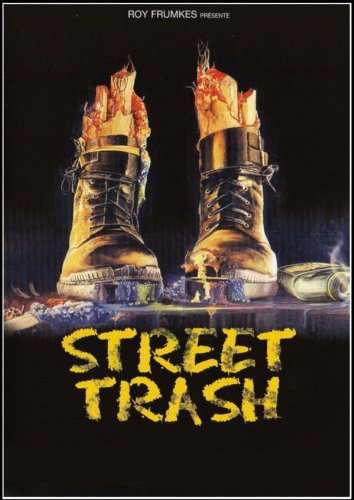 A junkyard in a crumbling district of the Bronx, New York, USA: Fred and his younger brother Kevin have been living there in some kind of den made from old tires. Fred is as happy there as he would be anywhere, but Kevin is dying to rejoin “normal” society” and to live a decent life: that causes friction between the two. Yet they will have to get along to solve some problems that are tarnishing their lives: we have the former G.I ., group leader, who resents them… because he hates everyone by principle, the vile Schnizer who wants to remove them from their junkyard, Nick Duran who hates Fred because he “borrowed” his girlfriend… and then, there’s this gut-wrenching “Viper”, and time has given it an acid strength as well as explosive properties! We have gore movies, but we also have trash movies: Hershell Cordon. Lewis, Russ Meyer and John Waters are the masters of the genre, “Manic” and “Basket Case” by Frank Henenlotter are examples of it. “Street Trash”, directed by Jim Muro (21), is trash: it adds various but garish colors to the red of the gore genre. Fireworks of feelings, blood and colorful fluids, it has the look of a special number of “Zoom” on the Bronx though and is directed with a certain brilliance. “Colors that overlap just like traveling with sharp turns, pushed against each other by an insane process of editing. The mutations are the work of Jennifer Aspinall, a young woman whose work has already been seen in ‘Toxic’”. (Starfix)