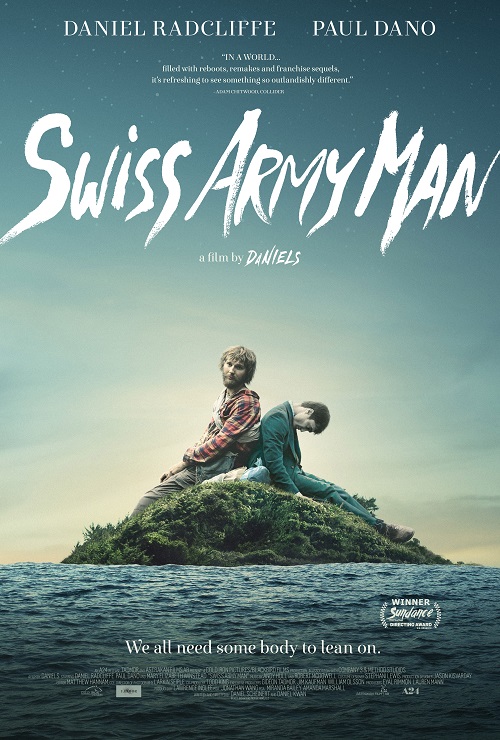 Hank is at the end of his tether. Shipwrecked all alone on an island,
he’s about to end it all. But just before he tightens the noose, the sea
vomits a corpse onto the shore. Hank approaches his new companion,
who constantly releases voluminous quantities of “methane” in
the atmosphere. This gives him a brilliant idea. He can use the farts
propelled stiff to finally get off this damn island. Even better, once
across, the dead guy becomes quite talkative. Hank decides to call
him Manny. And that’s the start of a long journey back to civilization,
where Manny will be used as a Swiss army knife to solve all the
obstacles this extraordinary duo will find on its path.
Swiss Army Man has conquered as many festivals as it has divided
critics. One thing is certain. This is one of the most original films of
the 21st century, with already a dozen international awards and as
many nominations under its belt. The feature debut of video-clip
and publicity spot directors Daniel Kwan and Daniel Scheinert is a
constant balance between organic vulgarity and existential poetry.
With Paul Dano (Little Miss Sunshine, Looper, Prisoners) as Hank and
Daniel Radcliffe (Harry Potter, The Woman in Black, Horns) in the
performance of a lifetime as Manny.