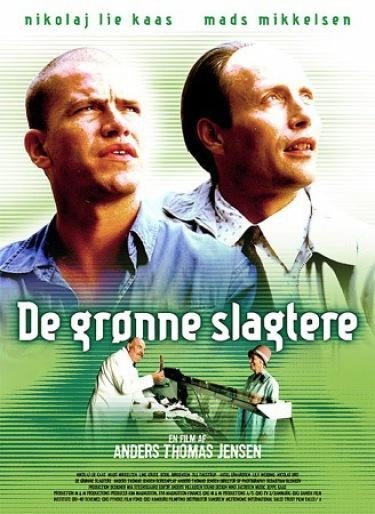 Svend is a nervous, insufferable geek. Bjarne is an asocial pothead. Unable to put up with their arrogant boss any longer, Svend and Bjarne go into business for themselves and set up their own butcher shop. Business is slow until Svend accidentally locks up an electrician in the freezer overnight. He tries to hide the death by grinding up the corpse. But when he finds himself unexpectedly short of meat, he’s forced to sell the only “stock” he has in shop. Almost immediately, the two entrepreneurs become the toast of the town. Riding high for the first time in his life, Svend is determined to keep things going, despite Bjarne’s resistance. Soon, people start disappearing.

Danish director Anders Thomas Jensen is best known as a scriptwriter of the Dogma films Mifune’s Last Song and Open Hearts and for his debut long feature Flickering Lights. His second film, The Green Butchers, is a grisly exploration into the loathsome world of two memorable losers, brilliantly portrayed by Mads Mikkelsen (I Am Dina, Wilbur Wants To Kill Himself) as Svend and Nikolaj Lie Kaas (Possessed, Old Men in New Cars) as Bjarne. Underneath the ink black humor, the merciless social satire and the unrepentant political correctness, lies the need to be accepted and what we’ll do to get it.